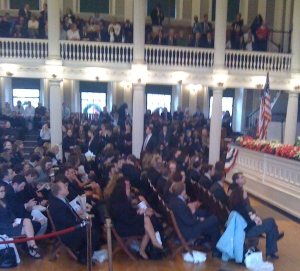 I was at what was billed as an “inter-faith prayer breakfast” recently and there were many faces familiar to me in the large crowd. We polished off carafes of bad coffee while we glad-handed even before the speeches started. I was right in the thick of things, smiling and nodding as I listened to the catch up news from various people I knew. Anyone who saw me would have pegged me as a banquet pro. But the reality was that with every passing minute my desire to bolt out of the nearest exit increased. While I appeared engaged, I had actually stepped into my own head the second I stepped into the room. You see, while I regularly attend social gatherings, my dirty little secret is that I’m gregarious but I’m an introvert.

Maybe you can relate to my breakfast scenario. If so, you might not realize it but you are also an introvert. Introversion is often confused with shyness but they are two different personality types. A 2010 article in Psychology Today by Dr. Laurie Helgoe is the best I’ve read to explain the difference and introversion itself. http://www.psychologytoday.com/articles/201008/revenge-the-introvert

We introverts have “a preference for the inner world of their own mind rather than the outer world of sociability. Depleted by too much external stimulation, we thrive on reflection and solitude.” According to the article, it’s the external stimulation part that’s key. We don’t mind being with people at all. We’re just exhausted and confused by it. I know that after a few minutes of conversation with someone other than myself, I start having a hard time concentrating. That’s why I smile and nod a lot. The best situations for me are when I have an excuse to leave a conversation for a few minutes and come back. Sound familiar? As Helgoe says, “the introvert struggles to follow multiple conversation threads and sort out his own thoughts.”  It seems to me that a lot of what is called “socially awkward” these days is really introversion.

We introverts are at odds with the American culture because it values the attributes of extraversion. That’s not a bad thing in and of itself, it just puts us at a disadvantage. In a previous post I wrote about the “suit” of another personality that I felt forced to wear to deal with other people.  Now I understand that because I can be social, I didn’t want to reveal that it kind of hurts so I felt like an imposter. What a relief to know that I can be both solitary and social and still be a whole, genuine person.

The takeaway is that if you find yourself feeling like a fraud because others think you’re an outgoing “people person” and all you really want to do is be alone, don’t despair. You’re not being inauthentic, you’re just an introvert.